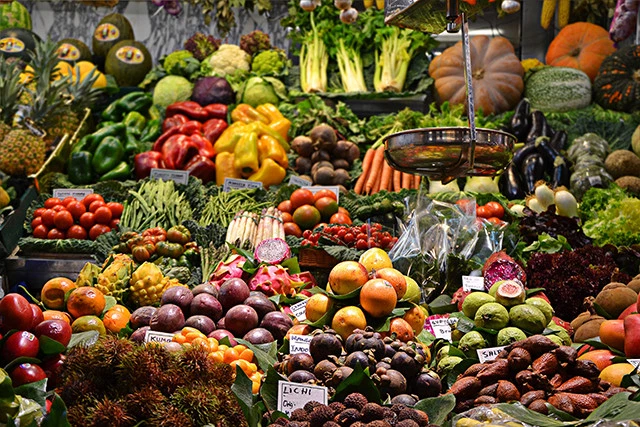 Eating a healthy plant-based diet — one with plenty of fruits, vegetables, whole grains, legumes and nuts and little or no meat — is associated with a lower risk of developing type 2 diabetes, according to a study published this week in JAMA Internal Medicine.

And when people adhere tightly to a plant-based diet and minimize their consumption of added sugars and refined carbohydrates, the risk falls even more, the study also reports.

“We found that eating plant-based diets was associated with, on average, 23 percent reduction in diabetes risk,” said Qi Sun, the study’s senior author and an associate professor of nutrition at the Harvard T. H. Chan School of Public Health, in an interview with CNN reporter Jacqueline Howard.

“We further showed that individuals who consumed a healthy version of the plant-based diet by emphasizing the intake of fresh fruits, vegetables, whole grains, nuts and legumes, and minimizing intake of sugar-sweetened beverages and refined carbohydrates, had a further 30 percent reduction in their risk of developing type 2 diabetes,” he added. “I would describe these risk reductions as being quite significant.”

As an expert who reviewed the study online for the United Kingdom’s National Health Service explained, those numbers mean that “if all of the participants in the studies had eaten a more plant-based diet, 6 out of every 100 might have developed type 2 diabetes instead of almost 8 in every 100.”

That’s a promising finding, given how widespread type 2 diabetes has become. In the United States, almost one in 10 adults — more than 30 million people — have been diagnosed with diabetes, and type 2 diabetes accounts for 95 percent of those cases, according to the Centers for Disease Control and Prevention (CDC). The incidence rate in the U.S. for type 2 diabetes has climbed rapidly in recent years, more than tripling over the past two decades.

Diet is considered a major risk factor for type 2 diabetes, and many previous studies have suggested that following a vegetarian or largely plant-based diet can help prevent or delay the onset of the disease. But those studies’ findings weren’t conclusive, in part because many did not follow their participants across time.

For the current study, Sun and his colleagues conducted a meta-analysis of nine previous studies — the highest-quality ones they could find — that had previously examined the link between plant-based diets and the risk of developing type 2 diabetes. Most of the studies were conducted in the United States, but some involved people living in the Netherlands, Greece, Taiwan and Singapore. The plant-based diets in the studies were primarily vegan or vegetarian (no meat, but dairy products and eggs), but in some cases they also included diets that had small amounts of meat and/or fish.

All were cohort studies, which meant they followed the participants over a period of time. In these studies, that time frame ranged from two to 28 years. During that period, 23,000 of the participants developed type 2 diabetes.

The Harvard researchers pooled all the data from the nine studies and then adjusted it to account for factors known to increase the risk of type 2 diabetes, such as age, BMI, smoking and family history of the disease. They then looked to see if the plant-based diets in the studies affected the risk of developing type 2 diabetes.

That’s when they found that people who adhered more strictly to a plant-based diet were 23 percent less likely to develop type 2 diabetes than those who were the least likely to follow that type of diet.

“This association was strengthened [by another 30 percent drop in risk] when only healthy plant-based foods, such as fruits, vegetables, whole grains, legumes, and nuts, were included in the definition of plant-based patterns,” the researchers write.

“To our knowledge,” they add, “the present study provides the most comprehensive evidence on the association between plant-based dietary patterns and incidence of type 2 diabetes.”

This study is observational, which means it can’t prove that a plant-based diet lowers the risk of type 2 diabetes. But, as Sun and his colleagues point out, several biological mechanisms may explain the link. Following a healthy plant-based diet, they note, has been shown in other research to reduce long-term weight gain, improve blood pressure, improve insulin sensitivity and mitigate systemic inflammation — all risk factors for type 2 diabetes.

The important word here is healthy. A vegetarian or vegan diet that includes lots of added sugar and refined carbohydrates can be problematic for health.

“Not all plant foods are equally beneficial and … the quality and food matrix (eg, whole grains vs. refined grains) play an important role in determining their health effects,” the researchers write.

Dietary recommendations should emphasize the quality of foods in a plant-based diet, not just the diet itself, they stress.